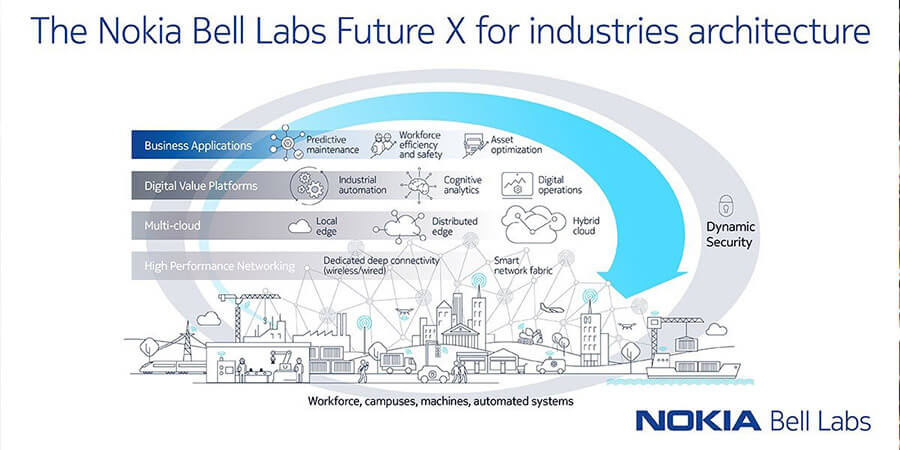 Nokia introduced its 'Future X for industries' strategy and architecture, developed by Bell Labs, to drive dramatic productivity improvements across a wide range of industry sectors. As technologies such as industrial Internet of Things (IIoT); edge cloud supporting augmented intelligence and advanced security analytics; and end-to-end 5G capable networks become a reality, they will radically speed up the digital transformation of industries such as manufacturing, logistics, transportation and energy, as well as governments and cities. Nokia's holistic approach promises to help drive a new era of productivity and human-machine interaction that will unlock trillions of dollars of economic value in the next decade.

To date, the digitalization and automation of enterprises has yielded productivity benefits, predominantly by shifting business support functions from physical to digital operations. While these gains have been notable, only about 30 percent of enterprises - largely in IT-centric industries - have been able to realize the 'digital opportunity'. Importantly, traditional asset-intensive industries - which comprise more than two-thirds of GDP in the U.S. - have yet to experience the full benefits of this digital transformation, known as Industry 4.0.

Physical industries depend on a variety of emerging business- and mission-critical applications that, when digitized and automated, offer the potential to make power grids smarter, factories more productive, the Internet of Medical Things (IoMT) responsive and reliable, cities safer and more livable and much, much more. In short, there is the potential to transform human existence and radically enhance industries and infrastructure in what will be the 4th industrial revolution.

Future X for industries
Emerging Industry 4.0 applications will require seamlessly interconnected systems that can sense, analyze, optimize, and control key attributes and actions across a broad range of assets including machinery, tools and devices. Nokia's Future X for industries architecture provides a framework for open, connected systems for each major industry that can accelerate the digitization and automation of these physical assets, with pinpoint precision and augmented intelligence, no matter where they are located.

To accomplish this, networks must be able to connect everything simultaneously, with guaranteed quality of service, even as the number, diversity and distribution of assets grows. For companies to analyze information about the state of those assets and optimize their operations, networks must have the flexibility to connect industry applications to compute resources in a way that meets stringent latency, capacity, reliability and security requirements. They must be able to dynamically adapt to transport massively varying amounts of data between a multitude of devices, sensors, machines and platforms to garner and apply deeper insights that ultimately support precise execution, maximize productivity and improve safety.

The company has also expanded its effort to address high-growth, high-margin opportunities with a set of enterprise and industry customers needing telco-grade networks. Toward this end we have established a new Enterprise Business Group that consolidates a range of existing, fast-growing activities into one focused organization reporting directly to the President and CEO, under the leadership of Kathrin Buvac, currently Nokia's Chief Strategy Officer.

The company has also continued to advance its partner strategy, including the formation and growth of its strategic partner ecosystem (including the establishment of new relationships with Infosys), and the expansion of its channel strategy which serves emerging market segments through channel partners, distributors and value-added resellers.

These moves build on Nokia's strong momentum with customers in key vertical markets, including recent agreements with Brazil's Elektro for the deployment of a Private LTE network to strengthen power grid reliability and efficiency, the first trial of LTE air-to-ground technology in the Middle East with STC, and an agreement with China Unicom to jointly support digital manufacturing capabilities for BMW Brilliance in China, using private LTE and Multi-access Edge Computing (MEC) capabilities.