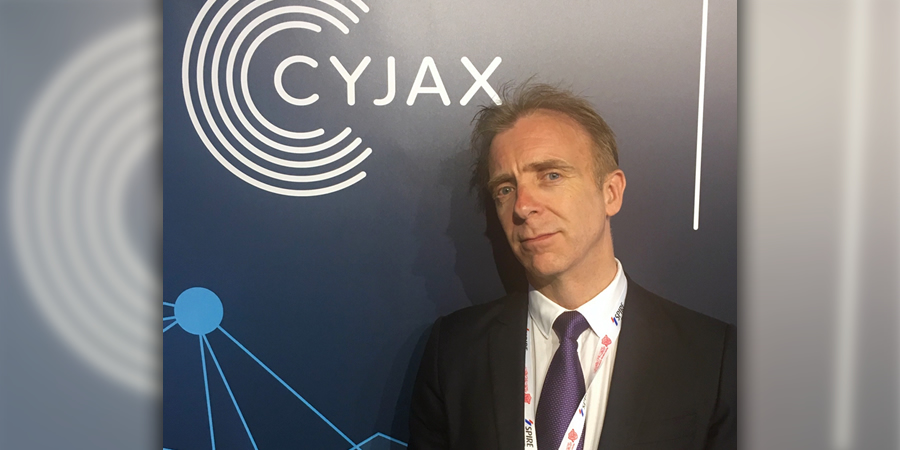 Telecom Review Middle East attended GISEC and secured an interview with Mark Pearce, Cyjax’s Chief Marketing Officer to find out what they have been showcasing at the event.

Cyjax is a UK-based threat intelligence company with a global footprint and have taken the initiative to have a permanent presence in the region. It is currently working with government agencies including law enforcement, infrastructure and critical national infrastructures. Cyjax officially launched their business into the Middle East at the event.

Are you showcasing anything new at GISEC and why GISEC?

This is our official launch into the Middle East. We are a UK based company, we do have a global footprint, we have taken the decision both commercially and culturally to have a permanent presence in the region. We are actually showcasing us and our technologies.

The initial target area in the region for our business would be the UAE at the moment, but we have been considering spreading our wings to other GCC countries as well so we have had lots of interest from other countries outside the UAE.

GISEC seemed like the perfect fit. It’s dedicated to security, is a little more relevant to our business than the other exhibitions in the region like GITEX, which we will probably do later in the year. GISEC gives us a wonderful platform to meet potential partners and discuss current issues in the industry.

Could you tell us a little about your latest partnership with the UAE government?

We have been working with them for the past 2 years. We provided threat intelligence to a critical part of the government and we have been very successful in identifying threats and actually heading off numerous attacks; so we have been able to help them while give them context around what’s going on, what emerging threats are going on and what actual threats are actually happening now. We have been very successful in doing some takedowns and putting in place mitigation measures for them as well, so it’s been a fun two years with them.

Could you tell me more about the role you think your company plays in the digital transformation?

The term cybersecurity is actually a huge term, we are one facet of that.

We think we are a very important part of it. We are going to be promoting the merits of having a good robust cyber threat intelligence strategy within the cybersecurity strategy bringing in the right kind of intelligence to come as action intelligence, stuff that means something to that organization, not just loads of false positives which nobody will ever read; we are doing it very precisely.

In your opinion, how should organizations address the growing global threat landscape and how could they restore balance after an attack?

We have come from the three main areas, we have seen the huge weaponization of social media, growing geopolitical tensions and for nations they get involved in this stuff as well and he level of security IQ in organizations to actually recognize the danger sequence or potential attacks so we have been keen to address all of those things and raise the awareness of each one of those component s top those organizations. But I think if they address those, it will go some way in combating the current threats and the emerging threats, those emerging threats and the threats further down the line are not going to stop. The interest groups, hacking teams and all those kinds of nefarious actors, they’re not going to stop, they’ve got threat intelligence now, they’re going to use other tactics to try to get around all of those things so it’s a complex situation and it’s a complex situation that’s not going to stop. Those first three I mentioned are the ones were going to be addressing now and those could be the drivers that work towards what I have suggested.

We need to be as close to them [the hackers] as possible when it comes to attacks. You’re dealing with groups of individuals, as well as gangs, that are highly advanced, highly intelligent, highly motivated and they’re sponsored. Whether they’re nation-state sponsored or organized crime gangs, these are motivated individuals that have got high IQs. So we have got to try to match them and tackle these issues. We do a lot of proactive stuff but you still have to do the reactive stuff because you never know what’s coming down the road with these attacks.

What are the problems and gaps in the industry with regards to cyber security?

The biggest vacuum in the industry is the skills gap actually. We’ve seen it in the UK and Europe; I don’t see any real difference here. It’s the skills and the people required to actually combat these attacks, there’s simply not enough people with the skills. So we have been working with Oxford University in the UK to help with their computer science programs and we are going to be helping to build local talent in the UAE, it is part of our market entry as well. Bringing and training local talent is part of our commitment to the region.

That’s probably the biggest gap there is. We could talk about technical gaps and things like that but the biggest gap has got to be the people. There are simply not enough people with cyber security qualifications to understand what these attacks are. People who turn from being a hacker or a bad guy to a good guy, those are the ones that need to be nurtured and educated to put their immense intellectual talents to do good, that’s how you have got to combat it. There are a lot of cases of that happening but there needs to be more. We are on the advisory committee for Oxford University so we actually give lectures to the students, it’s quite scary, you’ve got a room full of very bright people! When we teach and work with them, we do our best to give them real world examples, so it’s not just theoretical.

Apart from the projects you’ve mentioned, is there anything else your company aims to achieve for the rest of the year?

Our biggest ambition apart from opening the permanent office and securing new business in the region is to help build that local talent. Because if we have got local talent that are trained to use particularly our technology, that is going to be a great benefit for the enterprises out here. Our company has got Arabic-speaking analysts and we understand the nuances of what’s going on over here to have a local talent that can actually get into, not just the technical aspects but rather the socially engineered aspects as well is immensely important. Our intelligence is driven by technology and cute things like AI and machine learning that’s the technical bit but what makes it really special is the human aspect and that’s what we want to bring into the region, it’s that human intellect that is going to make the technology really sharp.