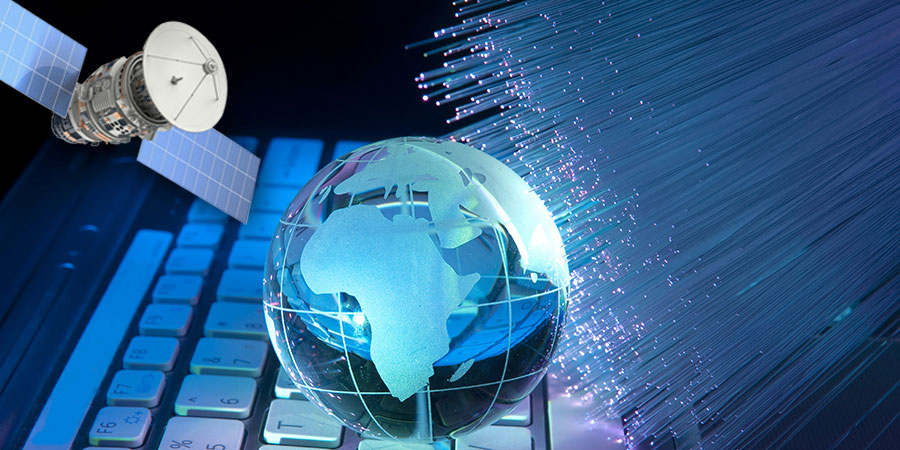 When it comes to the transmission of signals and connectivity, telecom providers nowadays provide a more flexible and robust model where fiber is backed up by satellite. These two work side-by-side to ensure that downtime and outages can have no adverse effects. So in case fiber interruptions happen due to uncontrollable or unexpected factors, satellite connectivity enables enterprises, governments, and facilities to continue functioning smoothly.

Mainly depending on the geographic location and coverage area, there may be several options to connect to the Internet or television. In more remote locations, there may be only one option, but throughout most parts of the world, this has been changing.

Let us see how fiber optic and satellite communications differ and can be utilized efficiently to provide better connectivity to those in need.

Fiber optics, or optical fiber, is associated with the transmission of information by sending pulses of light through a long fiber, usually made of plastic or glass. Using fiber optic cable, telecommunications links are made possible over much greater distances and lower levels of loss in the transmission medium. Most importantly, fiber optics have enabled much higher data rates to be accommodated allowing more data to be transmitted in a shorter period of time.

Among the key advantages of optic fiber communication are extremely high bandwidth, immunity to electromagnetic interference, non-existent delays, and immunity from interception by external means. Hence, fiber optic systems are widely utilized as the backbone of major telecommunications infrastructure, catering to Ethernet systems, broadband distribution, and even general data networking.

By 2019, the global fiber optics market was worth roughly $4.3 billion but due to the growing demand for internet access and telecom services, the fiber optics market is projected to reach nearly $7 billion by 2024, according to MarketsandMarkets. Considering the numbers, >4 billion km is the length of optical fiber installed worldwide, roughly the distance between Earth and Neptune while >20 terabits/s is the data transfer rate of a single fiber-optic link, equivalent to streaming roughly 4 million HD videos.

A satellite basically receives signals from Earth and retransmits those signals back with the use of antennas and transponders. Through satellite communications, signals between a transmitter and a receiver can be transmitted at different locations. As a matter of fact, there are thousands of communications satellites being used for radio, TV, telephone, Internet, military, and other applications.

New technology and increasing demand have changed the way communications satellites are used, with more powerful satellites and the use of higher frequencies allowing everyday activities to rely on telecommunication satellites that are in orbit, located almost 36,000 kilometers away. One good example is when Internet service providers (ISPs) often link their servers to the satellite. With the existence of powerful broadband satellites, Internet access can be obtained regardless of consumers’ distance from the nearest terrestrial node.

The large distance of satellites from the Earth typically results in delays, making two-way communication like mobile conversations unpractical. On the other hand, advancements in miniaturization and digitalization have substantially increased satellite capacity over the years. In detail, Ku-band and Ka-band spectrums are suitable for direct-to-home (DTH) broadcasting as well as broadband data communications.

Correlation between fiber optics and satellites

Satellites and fiber optics in telecommunications should not be seen as competitors with each other. In common analogy, it’s similar to how we can’t argue the essence of airplanes and cars as they function in different landscapes with the common ground of being a form of transportation.

Thus, these two complement each other as “gap fillers,” wherein the satellite is commonly used to fill the gaps in the coverage areas that did not yet have access to fiber. The comparison table below sums up the differences in terms of signal distribution, area of coverage, data rate, and bandwidth, among others.

Both optical fiber and satellite communication are the leading technologies that are making far-reaching changes in the telecommunication industry. One as well as the other have their fair share of gains and losses, making them suitable for specific types of cases.

Their properties are distinct from one another and consequently, their usage varies. Satellite communication is best suited for poorly connected areas and places where it is difficult to lay wires like fiber optics. On the contrary, fibers are suited for urban areas with good infrastructures.

The data transmission rates in fiber optics are high with minimal propagation delays while the large distance from the Earth to the satellites results in inadvertent delays in transfer. For example, single-mode fibers can transmit 100 Gbps on up to 100 closely spaced wavelengths, for a total of 10 terabits per second.

It has been debated that communication using fiber optics is more reliable than satellites and is less prone to errors. Yet, the terrestrial nature of the services from fiber internet providers means they can become damaged as cables can be cut accidentally or damaged through an environmental issue. With satellite internet, as it widely covers a large area of the world, creating built-in options to reroute traffic for continual service is done to minimize impact in case of satellite failures.

Taking into account the costs, internet over fiber will vary based on the current infrastructure and the location of the fiber optic line to the desired location of transmission. As a result, the more distant the area is, the more expensive the cost will be. With satellite costs, particularly for the Internet, location is not a significant factor. Instead, the initial equipment and installation can be subject to high charges.

Due to minimal delays in communications, fiber optics are more suitable for real-time communications while satellites are intended for broadcasting. Moreover, fiber internet providers require a terrestrial infrastructure giving them a stable point for transmission and reception. From another point of view, satellite coverage includes the mobility factor, making it viable for mobile operations, shipping lines, and military applications where the end-use point of the system can be remotely done on a regular basis.

Strong and resilient connectivity for everyone

Telcos should consider delivering resilient connectivity by leveraging high-performance GEO satellites, low-latency MEO services, advanced ground systems, and IP-based terrestrial networks. In this way, fiber is backed up by a connection that can be sustained in terms of coverage, throughput, and latency, as well as guaranteed uninterrupted service in case of emergency.

As more services go digital, the reliance on a single route fiber connection is no longer sustainable for telecommunication providers. It will be a significant edge to have a system that can withstand failures of fiber optic networks. Thus, service providers should have diversity in internet access technologies.

Satellites and fiber optics are not mutually exclusive. A combination of both may just be what’s needed to establish stronger and more flexible connectivity for everyone.