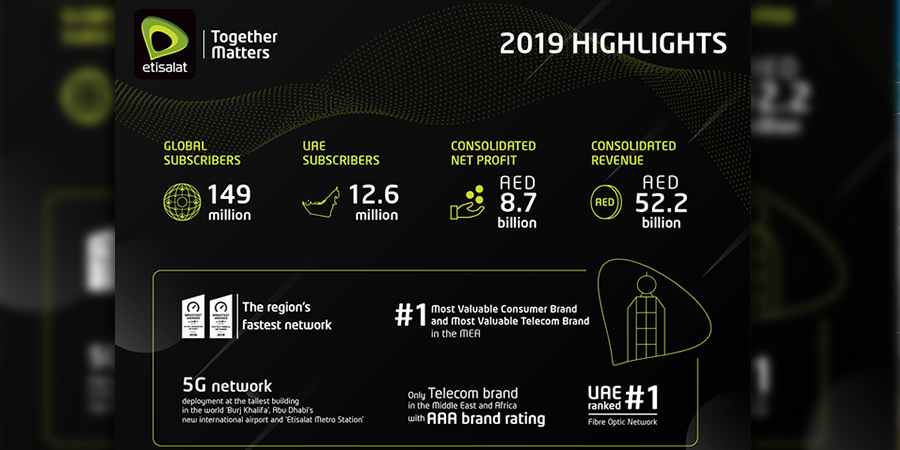 Etisalat Group has announced its consolidated financial statements for the year ending December 31 2019. According to the report, twelve month consolidated revenues reached to AED 52.2 billion, while consolidated net profit after Federal Royalty for the twelve month amounted to AED 8.7 billion, an increase of 1% compared to same period last year.

Additionally, consolidated EBITDA amounted to AED 26.4 billion, representing an increase of 2% year over year and resulting in EBITDA margin of 51%.

Etisalat has been investing heavily in new technologies, especially in 5G. In December 2019, the telecom giant deployed Multi-Access Edge Computing (MEC) architecture to pave the way for new 5G-supported services, and to deliver the best-in-class video streaming performance for 5G networks.

“5G is a game changer with Etisalat taking the lead in the launch of the network which will amplify the use of futuristic services, target new opportunities and implement 5G use cases across verticals. This has also set the roadmap for services based on emerging technologies such as IoT, cloud, big data, AI, robotics, autonomous, AR/VR, becoming a trusted partner that supports transformation in a digitally disrupted and fully connected world. Our continuous investments in the network also led Etisalat to be recognised as MENA’s fastest mobile network and GCC, Africa, Arabian region’s fastest fixed broadband network.

H.E. Obaid Humaid Al Tayer, Chairman, Etisalat Group, said: “As we begin our journey into the next decade, 2019 was a testimony to Etisalat Group leadership locally, regionally and internationally. Etisalat continued reinforcing its core business and explore new growth opportunities while transitioning to the digital era and being well geared for the future.

Etisalat Group has led the digital transformation by proactively responding to technological advancements and bringing the latest global innovations to nurture creativity.  It has become clear that the paradigm shift in the telecom industry is now in full force. Digital transformation is becoming present in more areas of life, and we have striven to be at the forefront leading it.

“Etisalat’s performance in the past year is a reflection of the company’s capabilities and agility to transform and lead in the digital space driven by our robust vision and strategy. 5G today will give an opportunity to spur innovation across many industries while enabling emergent technologies to become an integral part of UAE economy and lifestyle.