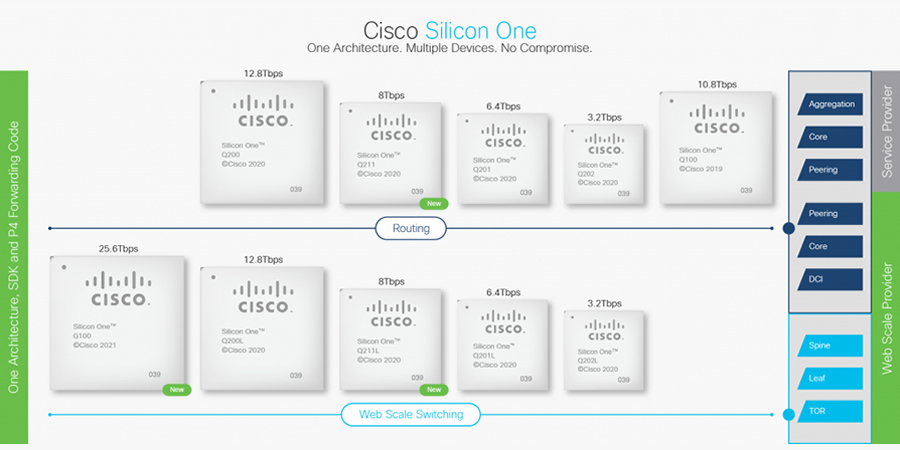 Cisco Silicon One G100 allows customers to scale-up their networks because of its innovative packet processing engines. The G100 can process a single flow at the full 1.6Tbps, a four-times speed increase over today’s deployed 400GE interfaces.

Rakesh Chopra, Cisco Fellow in Cisco's Common Hardware Group said: “The hard dividing lines in the industry between routing silicon and web-scale switching silicon are being erased, resulting in massive benefits for the industry. But convergence alone is not enough. We’re now building world-class, purpose-built devices based on our fully unified Cisco Silicon One architecture allowing our customers to enjoy the benefits of the most flexible architecture and the best individual devices.”

The G100 is an upgrade to the 12.8Tbps of Cisco Silicon One Q200 that allowed routing silicon with a 7nm high-performance, large-scale, and run-to-completion P4 engine, and deep buffers.

The Cisco Silicon One portfolio is known to cover the entire space — from service providers and web-scale routers to the Top of Rack (TOR) switches and everything in between. It is designed to be endlessly scalable, enabling faster iterations of future generations.

Chuck Robbins, chairman and CEO of Cisco previously said: "We are dedicated to transforming the industry to build a new internet for the 5G era. Our latest solutions in silicon, optics, and software represent the continued innovation we're driving that helps our customers stay ahead of the curve and create new, ground-breaking experiences for their customers and end-users for decades to come.”