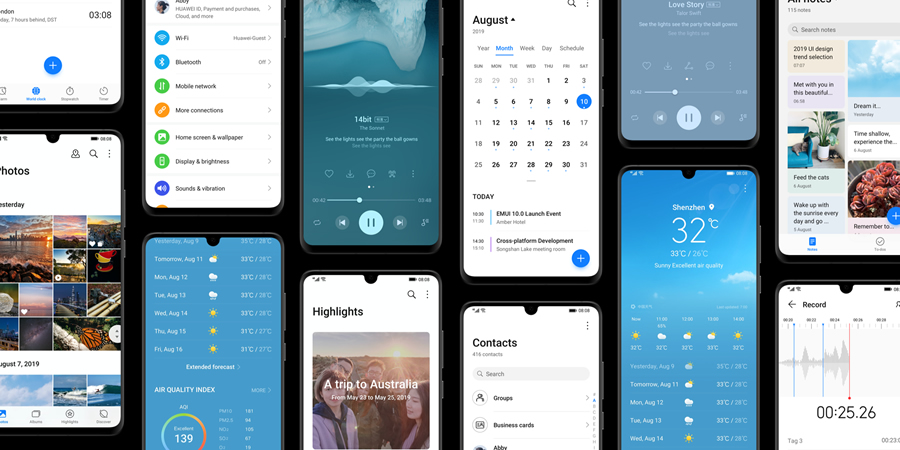 Huawei, a brand known and loved for its smartphones that cater to every kind of user, has always seen great appreciation for its EMUI platform. Packed to the brim with unique features that are targeted for every type of customer, the EMUI platform is known for its smooth operations and flawless execution of its unique features.

Now with more than 500 million daily active users in 216 countries and regions with support for 77 languages, Huawei’s EMUI has come a long way from its inception back in 2012. Dedicated to providing premium user experiences, Huawei has invested heavily into developing EMUI even further, adding new features and creating an experience like no other. This has resulted in the all new EMUI10, Huawei’s latest software update, all set to roll out your Huawei smartphone soon.

Huawei Developers Congress was held on August 9, in Dongguan, where EMUI10 was officially released. Dr. Wang Chenglu, President of the Software Engineering Department at Huawei Consumer Business Group, said that EMUI10 is pioneering distributed technology applications for providing an all-scenario experience. Its development has enabled scenario-specific applications such as audio and video calls in all scenarios, business tasks across devices, and smart vehicle-mounted devices. In the same stroke, one-time development for multi-device deployment can reduce costs, improve efficiency, and provide users with an all-scenario, smart experience.

EMUI10 adds a dark mode to bring more visual comfort. Human factors research revealed that a color's brightness and saturation are perceived differently depending on a light or dark background. The dark mode optimizes both color contrast between texts and dark backgrounds as well as the color of texts and system icons, and the end result ensures the visual consistency, comfort, and legibility.

Distributed technology transforms cross-device experiences
EMUI10 adopts revolutionary distributed technology to support HD video calls among multiple devices. Users can make audio and video calls whenever and wherever they are. If there is an incoming call, users can choose to answer using a smart speaker. Or if it is a video call, they can answer through a TV, vehicle-mounted device, or even send a real-time video feed from a drone so that friends and family can also enjoy the beautiful scenery. At work, a smartphone and computer can share screens so that data can be exchanged easily through drag-and-drop. Such a seamless experience is made possible by revolutionary distributed technology.

To implement distributed technology, the hardware capabilities of each device need to first be virtualized. In other words, what a device is capable of, such as in terms of its display, camera, microphone, or speaker, is not based on the device itself but rather a shared resource pool. In this way, each device can leverage needed functions or hardware capabilities from the resource pool or by sharing their capabilities with other devices. Therefore, for users and applications, different devices can be merged into one.

Huawei continuously pays attention to security. In addition to improve product experience, it also builds up a distributed all-scenario security system. It fortifies an in-depth security defense system by using in-house hardware and software, and uses a chip system architecture and system kernel as a foundation for security and trust. Only devices authenticated by the user can be connected to other user devices, and in addition, communication between devices is encrypted end-to-end to ensure absolute security of data transmission.

Providing consistent all-scenario user experience
There are more diversified smart devices including smartphones and smart TVs, and with the popularization of application ecosystems, the number of devices and applications of a user is rapidly increasing. Users require having the same experience as they use the same service in different devices and having access to services with any device no matter where they are. Consequently, developers face great challenges in multi-device adaptation, multi-language learning, and cross-device data convergence.

In the future era of multiple scenarios and multiple devices, application developers need to change when the requirements are changed. As stated at the launch event, EMUI provides a distributed UI programming framework and virtualizes hardware capabilities. As a result, developers can create apps for multiple devices without needing to make adaptations for the same program.

EMUI exhibits its capability in driving the industry and facilitating ecosystem development
In recent years, the number of Huawei mobile phone users has increased significantly. Huawei shipped 100 million units in just five months this year, and in the future, EMUI will provide more applications and synergized cross-device experiences for users.

Huawei has always adhered to finding mutually beneficial opportunities, and it was said during the launch event that Huawei will continue to make the capabilities of tools and platforms such as the Ark Compiler and Huawei DevEco Studio more open. It is also stated that Huawei intended to work with developers and industry partners for win-win outcomes and to jointly create innovative experience across all scenarios.

Huawei P30 series will be the first to upgrade to the EMUI10 Beta version for internal testing on September 8 and will be available for the Mate 20 series later on. During the launch event, Dr. Wang Chenglu also announced that EMUI10 will be firstly launched in the next generation of the Mate series. You can learn more about the latest models for internal testing and EMUI10 through Huawei's official channels.
Tweet