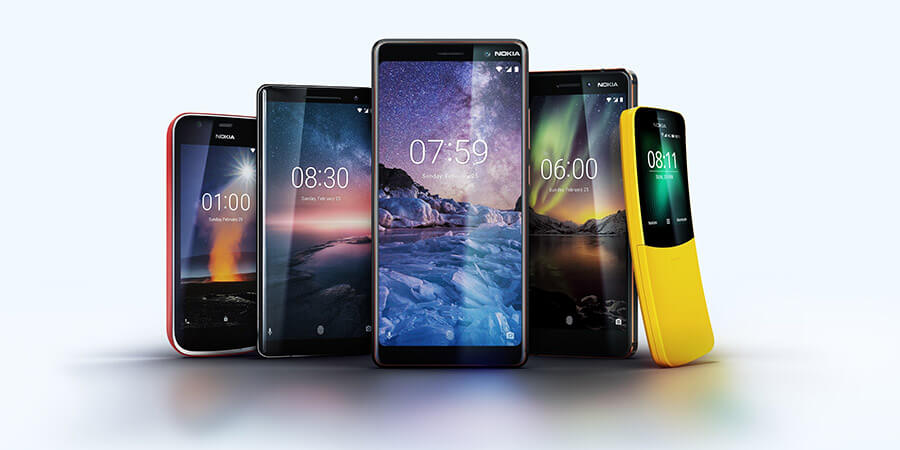 HMD Global enjoyed incredible success globally with its diverse range of Nokia smartphones in 2017, and it firmly believes it can replicate that success in 2018 with its latest portfolio of devices. The Finnish company markets and manufacturers smartphones under the fabled Nokia brand. At Mobile World Congress in Barcelona, it unveiled four new Android devices to its line-up and introduced a revival of the Nokia 8110 which was originally released in 1996.

Telecom Review managed to secure an exclusive interview with Sanmeet Singh Kochhar, General Manager of HMD Global Middle East at MWC. He outlined in detail the capabilities of each device and expressed his confidence that HMD Global can continue to build on the success it has achieved in the last twelve months with its new range of Android smartphones. He claimed that 2018 will be a 'defining' year for the company.

The first smartphone showcased during our interview was the flagship Nokia 8 Sirocco, which Mr. Kochhar believes will resonate with consumers on a global basis and will become a huge success for the HMD Global brand.

Nokia 8 Sirocco:
"We've announced a total of five new devices to our product portfolio, four on Android and the Nokia 8110 reloaded, which is the newest retro smartphone offer from HMD. The first phone I'd like to discuss out of the four new Android smartphones released is the Nokia 8 Sirocco which is a unique, elegant and premium device. It's curved on all sides and has a beautiful instinctive design finished with a diamond cut - and there's a real premium feel to this particular device. We've opted for 95% of this Nokia 8 Sirocco to be made of glass. In terms of entertainment, this device has a 12-megapixel primary camera and ZEISS optics. In terms of audio recording, it has record distortion free audio capabilities, which is assisted by three high-performances mics. The device is powered by the Qualcomm Snapdragon 835 processor that provides the Nokia 8 Sirocco with 6GB of RAM and 128GB of storage. In addition to this, it supports wireless charging and IP67. It's our flagship smartphone and we believe it's going to be a phenomenal success for us. The Nokia 8 Sirocco will retail in the UAE at AED 2339.00 including VAT which is an incredible price when it is officially launched in April."

The next device up for review was the Nokia 7 Plus, a smartphone specifically targeted at millennials who partake in content creation. This particular smartphone is unique in the fact that it gives total autonomy to the consumer.

Nokia 7 Plus:
"We're also launching the Nokia 7 Plus. The Nokia 8 Sirocco was a premium device targeted at millennials. The Nokia 7 Plus is specifically targeted towards millennials who are content creators. This device has a 6-inch full HD screen, with an aspect ratio of 18:9. The research we've conducted indicated to us that these content creators spend on average at least five hours per-day on their smartphones. With that in mind, we focused on producing a high-performance battery that provides users with two-day battery back-up. We know that our consumers don't want to be told what to do and what app to use. So what we're doing now with our devices is that we have no skins, just pure Android. This means the consumers (millennials) have the opportunity to choose whatever application they want. We don't have any built-in apps on the device. This ensures the consumer has more space and they can choose exactly what they want. The device is powered by the Qualcomm Snapdragon 660 chipset, which is again very powerful. We will also launch the Nokia 7 Plus in April and it will retail in the UAE at AED1399 including VAT."

The Nokia 6 was an absolutely sensational success for the HMD Global brand last year sweeping multiple awards globally. However, the 2018 edition now has greater processing power and the General Manager of HMD Global Middle East believes the newest Nokia 6 will deliver even more success for the company.

Nokia 6 2018:
"The Nokia 6 we launched last year enjoyed incredible success winning over 17 prestigious awards globally. It is without doubt one of our blockbuster devices. However, we're not resting on our laurels and we're improving the Nokia 6 by launching a new 2018 edition of the smartphone that we believe is even better than last year's device. The 2018 Nokia 6 is a much more compact and robust phone. In terms of processing power the original Nokia 6 had a Qualcomm 430 processor, but we've now updated that to a Qualcomm Snapdragon 630 processor. We have improved the device's quality, durability and design. Our competitors don't provide such an array of different design options, and this is what differentiates us from our competitors and what the HMD Global brand is renowned for. The new edition of the Nokia 6 will retail in the UAE at AED899 including VAT."

The Nokia 1 is a smartphone specifically targeting those who haven't made the transition from feature phones to smartphones. The Middle East has a large number of feature phone users, but Kochhar believes that this latest offering from HMD Global can resonate with those consumers and help them make the switch.

Nokia 1 :
"We still have 1.3bn feature phone users across the world and there are a significant number of these consumers based in the Middle East market. The Middle East is one of our big feature phone markets, but we expect a lot of those consumers to make the transition to smartphones. We conducted research in an effort to understand what were the barriers preventing the consumers from making the transition from feature phones to smartphones. We found that a combination of the cost of buying a smartphone and the cost of data usage has thus far put many off from making the switch. So what we've done is implement the Android Oreo (Go edition) in the Nokia 1. This ensures that the operating system is light and so are the apps on the app store. For example if you're using YouTube, there's a YouTube (Go edition) which is a much lighter version than the regular YouTube that doesn't clog up storage space on the device and use a lot of data. One other option available to the consumer is that if he is using Wi-Fi he can download the video on YouTube and view it offline. This Nokia 1 will also be launched in April and will retail in the UAE at AED299 including VAT."

Nokia re-launched the famous Nokia 3310 last year at MWC and this year announced the revival of the Nokia 8110 from 1996. Whilst it didn't receive the same media attention as the 3310, many still expressed their delight at the rebirth of the 8110 - and HMD believe that it will sell very well.

Nokia 8110 Reloaded:
"This device represents a perfect blend of the Nokia heritage and modern technology. This is a feature phone but it's on 4G. This helps feature phone users to have access to multiple applications like YouTube, Facebook and Twitter. It's the ideal phone for a vacation or a weekend away if you don't want to carry your smartphone. It is a very robust and durable phone and is a very nice device that comes with the Nokia heritage for those who love some nostalgia. The Nokia 8110 Reloaded will be released in May and will retail in the UAE at AED249 including VAT."

Kochhar concluded by saying the latest portfolio of Android smartphones produced by the Finnish company in addition to its releases last year will help HMD Global achieve its overall objective of being amongst the top three smartphone players in the world.

He said, "Our overall objective is to be amongst the top three smartphone players in the world. Last year, we said that we will achieve it in the next 3-5 years. The aim this year is to get closer to that goal, and I think we're already pretty close. With this latest portfolio of devices we're very, very confident that this can take us to the next level. We're confident that with the right support from our partners and the love people have for the Nokia brand we can achieve our ambitions."