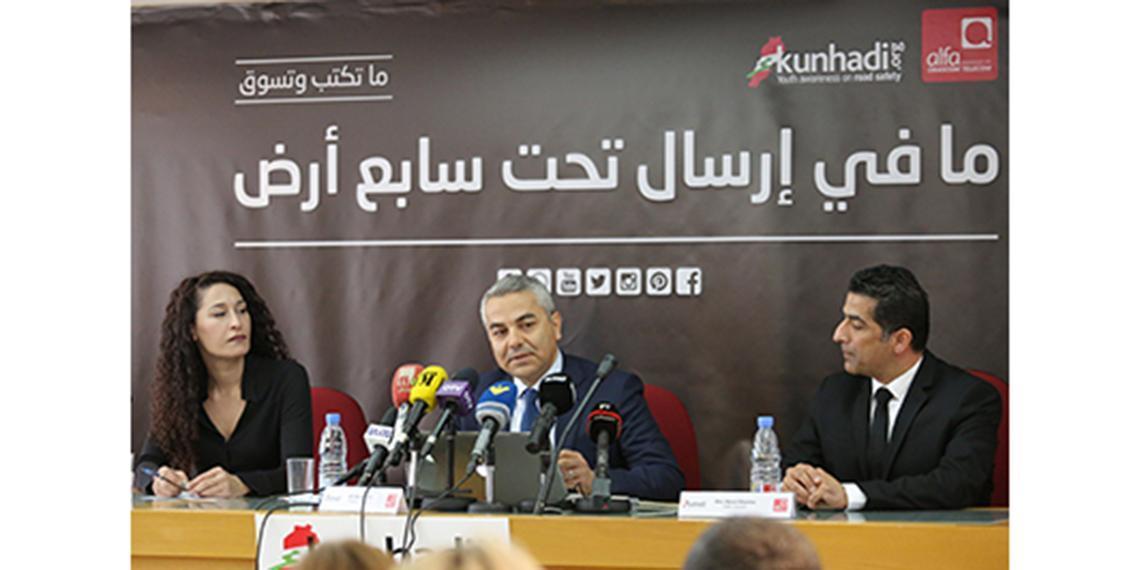 Under the auspices of His Excellency the Minister of Telecommunications, Boutros Harb, Alfa, managed by Orascom Telecom, partnered with Kunhadi for the third time to launch a campaign entitled ""There's No Network Underground"" to raise awareness on road safety and the risks of texting while driving.

The campaign was launched during a press conference held at the Press Club in Furn el Chebbak, in the presence of the representative of ISF general director major general, Ibrahim Basbous, the head of the Division of Public Relations Lieutenant, Colonel Joseph Moussallem. This is in addition to the representative of army commander, general Jean Kahwaji, Brigadier general, George Rizk, Alfa CEO and chairman Marwan Hayek, Kunhadi president Fadi Gebran, and a number of representatives from civil society and the media.

The press conference began with the Lebanese national anthem, followed by a minute of silence for the victims of traffic accidents in Lebanon.

In his speech, Kunhadi president thanked Minister of Telecommunications, Boutros Harb for his patronage and Alfa for being the first and only sponsor that contributes to Kunhadi's campaigns aiming to raise the Lebanese people's awareness about the risks of cellphone use when driving. He also thanked the Press Club for hosting this conference and M&C Saatchi.

Gebran then compared the number of traffic accidents according to ISF statistics for the June 22, 2015 - June 25, 2015 with the same period in 2014. This showed ""a drop in the number of collisions (by 72%) and casualties (by 40%), while those percentages dropped to 42% and 24% respectively between 2014 and 2015"". He pointed out: ""This indicates that the implementation of the traffic law and the citizens' abidance by it led to the decrease in the number of road traffic victims,"" noting that the item of the law that was mostly applied then was for speeding.

Alfa CEO and chairman, Marwan Hayek began his speech in jest: ""Some people wonder how we can support campaigns that may affect our profitability."" He added: ""This campaign falls within our support for all Kunhadi initiatives as part of our ongoing partnership together as part of Alfa 4-Life CSR program.""

He pointed out that this campaign is addressed to all drivers, especially those using phones and social media. While it is true that social media builds bridges between the different social segments, these bridges may crumble at any moment, claiming lives and leading to the destruction of families. Thus, we should be careful and avoid the use of these devices while driving because it can affect our lives and the lives of the people we love.