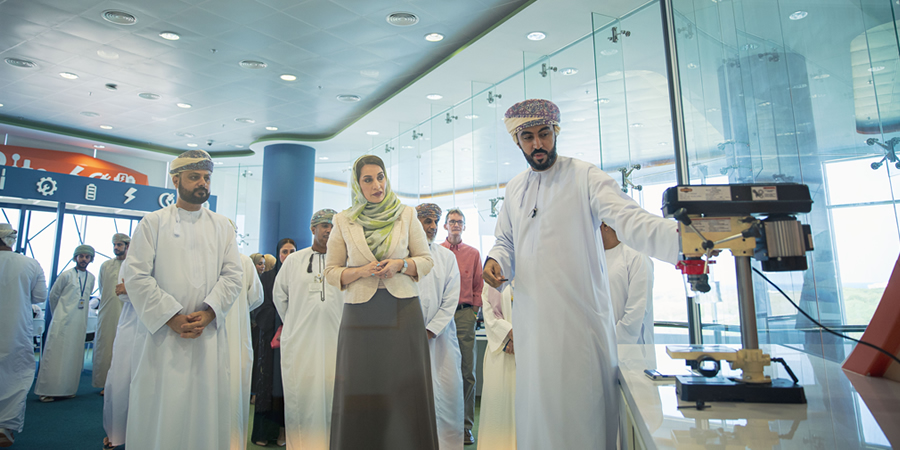 With the objective of instilling innovation and Information and Communications Technology (ICT) culture among children, “Innovation Corner by Omantel” was inaugurated at the Children’s Public Library in Qurum in the presence of Her Highness Al Sayyida Dr. Mona bint Fahad Al Said; Honorary Chairman and Authorized Founding Member of the Library and Talal bin Said Al Mamari; CEO of Omantel, along with a number of officials.

Her Highness and the attendees were given a detailed brief about the learning interactive means offered at the Innovation Corner to the children through modern technologies depending on smart solutions of information and communications technology (ICT). These technologies include 3-D printers, interactive electronic circuits and bespoke manufacturing devices for children along with performing live experiments using the available technologies and view the outcome instantly in addition to organizing interactive learning workshops and seminars for children. All these efforts are exerted by the Innovation Corner’s team, led by the Omani Innovator Sultan Al Subhi under Omantel’s direct supervision.

Laila Al Wahaibi, Corporate Social Responsibility Manager at Omantel, said, “Through this strategic cooperation with the Children’s Public Library, we endeavoured to spread digital knowledge culture among visitors of the library; especially children and boost their passion for conducting various experiments using digital technologies available in the corner and scientifically observe their results. The Innovation Corner by Omantel is considered an educational incubator through which children can learn from information technology and understand the digital technology-based scientific system.”

Al Wahaibi added, “We believe in the capabilities of Omani children and their future aspirations. In the light of the Fourth Industrial Revolution, we have prepared a rich environment for innovation that encourages children to think outside the box.”

“We are all proud of the educational and research services offered by the library to children and its efforts in supporting self-learning, promote reading, knowledge and exploration culture through several educational means. Omantel’s Innovation Corner is considered one of the main pillars of the Children’s Public Library; especially in the technical and digital aspect and complementary to the main role for which the library was opened,” Al Wahaibi said.

According to Al Wahaibi, Omantel’s CSR is based on sustainable initiatives aimed at enhancing the role of the Sultanate in the digital sector. In this regard, Omantel invested in a number of social initiatives aimed at developing the society, which, in turn, would strengthen Omantel’s contribution to supporting innovators on one hand and the promotion of the knowledge-based economy on the other hand.

Rashid bin Hamad Al-Kiyumi, Executive Director and Founding Member of Children's Public Library (CPL), stated, "The opening of the Innovation Corner by Omantel is a substantial addition to the educational services provided by the Children's Public Library to the children in the Sultanate. Now, CPL features more than 16,000 printed books and more than 3,000 eBooks, let alone multiple electronic educational games carefully selected. Therefore, the Innovation Corner would promote educational alternatives that are available to the visitors of CPL and would open new vistas for the development and improvement of the children's abilities and innovations.”

Sultan Al Subhi, Chief Operator of the Innovation Corner by Omantel, commented, “I’m delighted to be part of this great project where Omantel, from a corporate social responsibility aspect, believed that giving back to the community through technological education and hands on experiences is the best way to prepare an innovative young generation. I would also like to take this opportunity to thank Omantel for giving me the trust to lead the Innovation Corner and allocating funds for economically viable patents.”

Investing in the future of the nation, Omantel connects even the most remote communities of the Sultanate to each other and the rest of the world. Omantel is the Sultanate’s first and leading integrated telecommunications services provider, enabling the digital society to flourish, allowing new ways of doing business and delivering a world of information, news and entertainment. Today, Omantel is working to achieve the highest level of customers’ satisfaction as the most reliable and wide national network.