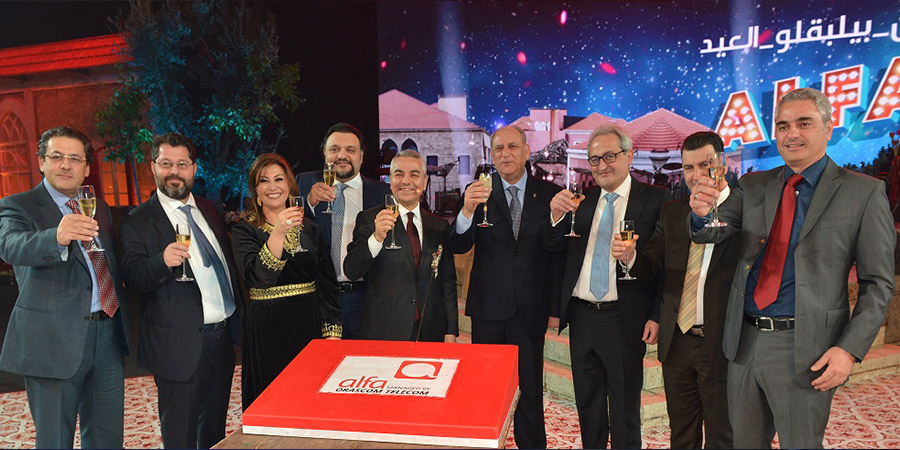 Alfa welcomed the New Year by celebrating 2017 milestones during an evening held at Biel in Downtown Beirut, Lebanon. The celebration was held under the theme #LebanonCelebrates focusing this year on the concept of the Lebanese village and the importance of attachment to the land, which is rooted in Alfa's culture.

His Excellency the Minister of Telecommunications, Jamal Jarrah, and his Alfa CEO and Chairman Marwan Hayek, as well as the company's administrative committee, attended the ceremony.

Minister Jarrah congratulated Alfa's team for the excellent work done in 2017. "The technological progress we have achieved together in this sector is only the beginning, as we are faced with many challenges and we count on you and your efforts," he said.

He pointed out that, "Mr. Hayek has great hopes and aspirations for the sector and for Alfa, and we stand by his side and are always supportive of every project that drives the sector towards further development and innovation."

He expressed his admiration for Alfa's family spirit in everything that the company does, in addition to his appreciation for the company's CSR projects, which support the Lebanese community. "In recognition of the struggle of people with special needs who are at the core of Alfa's CSR strategy, which we fully support, Marwan and I have called them the iron-willed."

He concluded, "We look forward to further cooperation, progress and development for the benefit of the sector, Lebanon and the Lebanese people".