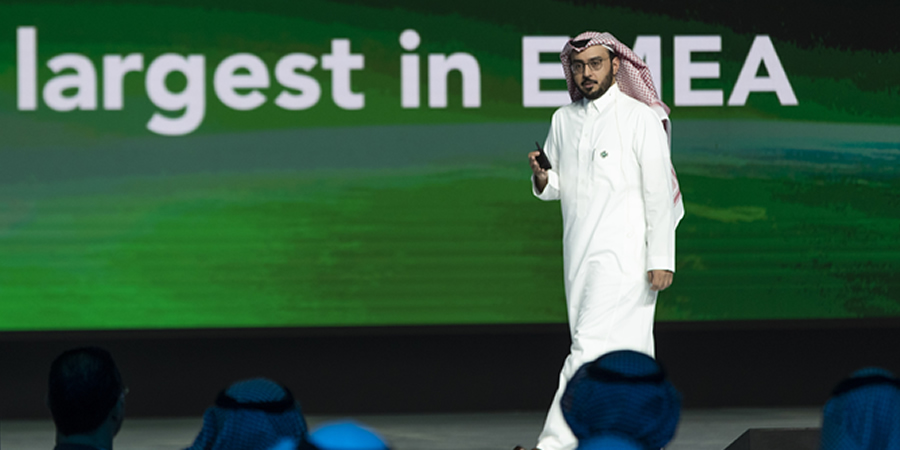 On May 17th of every year, information and communications technology stakeholders across the globe commemorate the World Telecommunication Day (WTISD). This year, ICT leaders are celebrating this occasion in new light brought on by the realization of the powerful role of communication technologies for the viability of all walks of life from business to education to human interaction. Organized under the theme: “Accelerating digital transformation in challenging times”, the event takes on a new outlook that builds on the connectivity theme highlighted by the G20 Riyadh summit (November 2020) where digital technologies have been hailed as a key enabler of attaining 21st century opportunities for all. Beyond that, connectivity is widely viewed as a main driver that will assist the recovery of nations in a post-COVID world, being essential for sustaining businesses, education, lifestyle, health and economies, in addition to its pivotal role for enhancing social inclusiveness and addressing inequalities.

As the world approaches this era of digital dominance, Saudi Arabia is comfortably zooming through after having made dramatic leaps with its clear vision marked out by Saudi Vision 2030’s digital transformation program. The Kingdom, whose $28.7 billion-ICT market (as of 2019) is the largest regionally and the 13th largest globally, has gone a long way upgrading its capabilities and enabling digitalization across the board with overall spending on ICT estimated at $37 billion in 2020.

Alongside with the bright visionaries and government tactics to transform the Kingdom into a bedrock for futuristic technologies that support a digital society and economy, the private sector plays a momentous role in accelerating the transformation.

Zain KSA has been an avid contributor to the Kingdom’s digitalization plan, helping bring the advance vision into realization through robust infrastructure investments, up-to-date services, and a dynamic business growth plan. For over a decade, Zain KSA has taken a proactive approach, championing a star-studded journey highlighted by its successful rollout of the 5G network (end of 2019), which has proven to bea major breakthrough in advancing the Kingdom’s capacities and position on the global ICT map.

During the initial phase of rolling out its state-of-the-art network, Zain KSA reached 35 cities across the Kingdom supported by 2,600 towers, the third largest 5G deployment globally at the time. With its SAR 2.9 billion investment in 2020 alone, Zain KSA still retains the largest 5G roll-out in the Middle East, Europe and Africa, and the fourth largest globally, with 50 cities covered by more than 4,700 towers. More so, the company was the first and only operator in the world to offer 5G carrier aggregation enabling super-fast wireless broadband speed of 2.4 Gbps. Catering to our customers’ connectivity needs beyond the Kingdom’s borders, we have also enabled the first 5G international roaming service for our subscribers in Kuwait and Bahrain with plans to expand the service across several other countries in the future.

The phenomenal success of Zain KSA’s 5G rollout has resonated across the globe, landing the Company among major international names in the industry and earning it multiple world-recognized accolades. Zain KSA delivers the fastest fixed broadband speed in the Kingdom with 133 Mbps, according to the Communications and Information Technology Commission’s (CITC) Digital Insights Q4 2020 report.

Zain KSA has been dubbed as a “trailblazer” owing to its effective 5G fixed-wireless access deployments which have demonstrated maximized network capacity, revealing the potential for take-up growth worldwide, as per Analysys Mason’s report 2020. Zain KSA progressed to the 12th rank in Saudi’s top 50 brands list for 2021, up from the 18th rank, as per Brand Finance’s annual report.

…for a smart society and economy

By supporting a new ecosystem that is all about utilizing the ultramodern technology, 5G technology has the power to transition to a digital society and economy. Boasting one of the region’s highest internet penetration rates (93% in 2020) and a global competitive e-commerce market, with revenues of $6 billion in 2020 (the 26th largest market globally), the Kingdom of Saudi Arabia has already made huge strides in digitalization. Furthermore, the Saudi capital Riyadh has advanced 18 ranks in the global Smart City Index 2020 (published by IMD), outperforming highly-connected hubs including Tokyo, Paris, and Rome.

With impressive upload and download speeds - ten times faster than the 4G - the 5G network can transform a large amount of activities with direct impact on the user’s experience, contributing immensely to a better quality of life as per Saudi Vision 2030’s goals.

In the business sector, 5G supports highly digitalized functionalities that would revolutionize operations across the spectrum from production methods, e-commerce, cloud computing, and government. The volume of digital services provided by government agencies showed an increase of 70% between February and April 2020, compared to the same period the year before. Furthermore, the enhanced speed and security of financial services offered through FinTech providers are also making way for more electronic transactions and digitalized procedures, thus improving the business environment and customer experience.

On cloud computing, Zain KSA was a pioneer in launching its locally based “Zain Cloud”, an array of safe and reliable Saudi based computing services that adheres to international standards and best practices by adopting the most advanced technologies and methods in the field. It has successfully served Saudi businesses, SMEs, entrepreneurs, and government sectors in partnership with AliBaba Cloud, one of the world’s largest cloud computing companies.

Additionally, the multiple giga-projects under development, including NEOM, Red Sea, and Qiddiya, which will put the Kingdom on the global map of digitally leading nations. Confirming its commitment to fast-track nation-wide digitalization and support businesses to continue to meet the requirements of the fourth industrial revolution, Zain KSA will offer telecommunications and internet services on the Red Sea’s sites during construction phase through an exclusive agreement with The Red Sea Development Company (TRSDC), making the Red Sea Project the first construction zone to have 5G coverage in the Middle East. Another memorandum of understanding (MoU) with the Saudi Authority for Industrial Cities and Technology Zones (MODON), will see Zain KSA offering 5G, telecommunications and high-speed internet services, as well as cloud and IoT services across MODON’s industrial cities.

Another opportunity to accelerate this transition is through smaller businesses. As part of Vision 2030’s plan to diversify the national economy through non-oil revenue, the Kingdom aims to increase SMEs contribution to the economy from 20% of GDP to 35% of GDP. Through its 5G technologies Zain KSA aims to support these businesses through tailored solutions that would deliver the best experience to enhance their operations and help them achieve higher customer satisfaction.

…and a global ultra-tech hub

Digitalization will continue to contribute to enhancing Saudi Arabia’s competitiveness on a regional and global level. The timely achievement of Zain’s 5G network has further contributed to the rise of the Kingdom’s global ICT standing where it was ranked as the top Digital Riser in the G20 by the World Economic Forum (September 2020), ahead of France and Indonesia. The Kingdom currently ranks 5th globally and 2nd in the G20 for mobile internet speed, with an average download speed of 133.73 Mbps. According to OpenSignal’s report, which has analyzed the real-world 5G experience of users across mobile operators in a number of countries globally, “5G users in Saudi Arabia see the fastest overall average download speed with 377.2 Mbps.

All in all, Zain KSA promises to continue to support the Kingdom and make such achievements especially with the shift in Zain’s new strategic direction of going capex light through ‘infrastructure sharing’ an attractive model not only in Saudi Arabia but around the world.

Tower sharing has been used in North America and Europe over the past decade, as it allows operations to be more efficient and allow sustainable growth. In a highly competitive and customer-centric industry, being efficient allows us to invest more on enhancing our digital services, focusing on innovation, improving customer experience, while also offering competitive value.

While considering the 5G availability, Saudi Arabia remains in first place with 37%. The Kingdom injected SAR 6.5 billion in investments to encourage the private sector to extend fiber-optic networks to 3.5 million homes and the mobile broadband network to over 570,000 homes in 2020. 5G services currently cover over 60% of the main Saudi cities and 45% of all the Kingdom’s cities. Zain KSA was the first operator to provide 5G services in 12 out of the Kingdom’s 13 administrative regions, according to CITC’s Meqyas Q4 2020 report.

Through its ultra-modern 5G network infrastructure, Zain KSA has underpinned the visions for a smart society and a digital economy, enhanced the Kingdom’s position among the world’s top investors in innovation, and supported the leadership’s pledge to promote the quality of life for citizens and transform the Kingdom into a global tech hub.

Marking WTISD this year, the UN’s International Telecommunication Union (ITU) calls on worldwide ICT players to facilitate partnership in areas such as innovation, infrastructure, investment, and capacity development and to share their technology-driven strategies and innovations to empower a better global response to challenges, in line with ITU’s Connect 2030 Agenda. By continuing to leverage the latest 5G evolution technologies, engineering groundbreaking solutions and devising innovative use cases, Zain KSA affirms its value as a main contributor to the advancement of the Kingdom’s digitalization efforts and an advocate of innovation that will help fulfill the global ICT goals for a connected future.