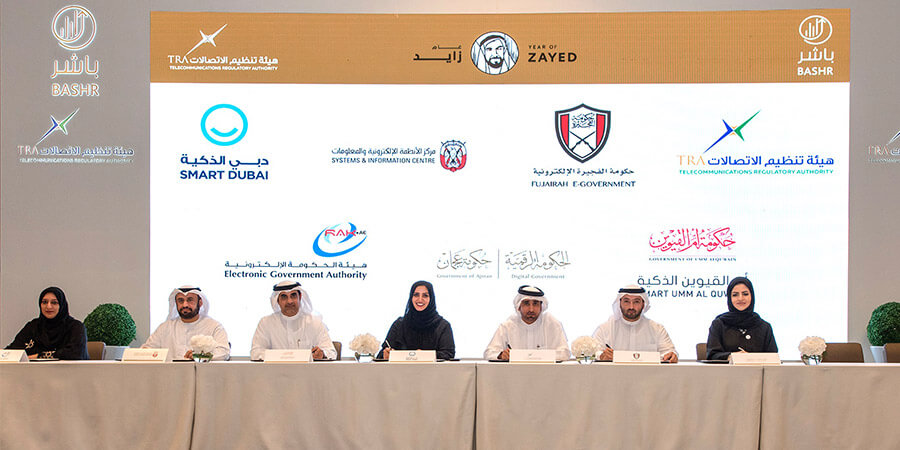 The General Authority for Regulating the Telecommunications Sector (TRA) announced the launch of the first phase of the "Bashr" initiative, one of the most important strategic initiatives implemented and developed through close and constructive cooperation with all local and federal government departments and entities involved in licensing economic activities in the UAE. This initiative aims to promote UAE's competitiveness in doing business by allowing to tart business in simple, fast steps taking no more than 15 minutes.

In this respect, H.E. Hamad Obaid Al Mansouri, TRA Director General, said, "Bashr initiative is based on the UAE vision to enhance the business environment to build a competitive, knowledge-based economy. As a result, it focuses on the UAE becoming the economic, touristic and commercial capital for more than two billion people by providing and developing specific world-class initiatives with international standards and a stimulating regulatory environment that attracts investments"

He noted that the initiative contributes to the achievement of the objectives of the National Agenda for UAE Vision 2021, and has been adopted based on the results of the annual meetings of the UAE government through the theme of smart services.

H.E. added, "This initiative is part of the directives of the supreme leadership highlighting the need to shape the future to ensure sustainability, competitiveness and leadership of our beloved country and the prosperity of the business community. The process for setting up businesses will be quick and easy and will override any cumbersome procedures. The initiative operates on a comprehensive, nationwide scale, involving federal and local actions, thus reflecting the scale of partnership in the delivery of the same between various federal and local government entities, especially economic development departments in the UAE."

H.E. Eng. Mohammed Ahmed bin Abdul Aziz Al Shehhi, Undersecretary for Economic Affairs in the Ministry of Economy, said that the "Bashr" initiative is one of the most important national initiatives that are in line with the UAE's efforts to promote a flexible and well-developed business environment and establish the UAE as an ideal investment destination.

H.E. added that the Ministry of Economy is collaborating with the TRA to implement this ambitious initiative, along with a number of other initiatives in cooperation and coordination with various federal and local entities, to stimulate and develop an attractive and distinctive business environment in the UAE.

Meanwhile, Mohammed Bin Taliah, Assistant Director General of Government Services at the Prime Minister's Office in the Ministry of Cabinet Affairs and the Future, affirmed that the development of an incubator and a business-stimulating environment is a key direction of the UAE government, which believes that achieving comprehensive sustainable development based on a strong future knowledge economy requires strengthening the business sector in various areas.

In the same context, Dr. Abdulrahman Al Shayeb Al Naqbi, General Director of the Department of Economic Development in Ras Al Khaimah, stated that the launch of the first phase of the "Bashr" initiative in cooperation with RAK's DED would not have been possible without the close collaboration with the TRA and the commendable efforts made by the various local departments within the Emirate (as part of the initiative's executive team), such as Ras Al Khaimah Courts, Ras Al Khaimah Chamber, Finance Department, Ras Al Khaimah Municipality and the Electronic Government Authority to provide all necessary technical, procedural and logistical requirements for the implementation of this initiative.

H.E. Khalifa bin Salem Al Mansouri, Undersecretary of the Department of Economic Development in Abu Dhabi, affirmed the keenness of Abu Dhabi's government to support initiatives, programs and strategic projects aimed at achieving the objectives of the National Agenda of UAE Vision 2021.

"This initiative is in line with Abu Dhabi's government drive to make a global paradigm shift in terms of licensing economic activities to investors at the state level," he said in a statement.

H.E. Khalifa Al Mansouri also stressed Abu Dhabi's DED keenness to provide all forms of support for the "Bashr" initiative with the aim to upgrade the government action system at the federal level and support the overall development process in various sectors to serve UAE's economy and society in general.

H.E. Sultan Abdullah Bin Hadda Al Suwaidi, Chairman of Sharjah Economic Development Department, said that "Bashr" initiative comes in line with the outcomes of the 2017 Annual Meetings of the Government of the UAE. This initiative will contribute to the development and enhancement of all respects of the investment environment for businessmen and investors.

H.E. Ali Issa Al Nuaimi, Director-General of Ajman DED, stressed the importance of the initiative as a qualitative achievement in the development of innovative and integrated government services that make customers happy, emphasizing that the DED is committed to the success of such initiatives as part of its constant commitment to support national efforts to create a fair investment environment in the various Emirates, thus contributing to UAE's leadership on the world economic map.

H.E. Mansour bin Sultan Al Kharji, Director General of Department of Economic Development in Umm al-Quwain said: "The launch of the "Bashr" service marks a new start for government integration at the local and federal levels. It is an important service to promote economic and investment activity in the UAE, especially in the sustainability stage, which is based on strengthening UAE's leadership."

In turn, H.E. Dr. Aisha Bint Butti Bin Bishr, Director General of Smart Dubai Office said, "The launch of "Bashr" initiative comes as part of an integrated system to bring about innovative and smart digital identity and signature solutions that will culminate in Dubai Smart's partnership with the TRA. The system aims to enhance the performance of the investment sector and support investors by easing business and saving time and effort, in line with the vision of our leadership and objectives of the UAE Centennial 2071."

H.E added: "We are pleased today to complete the first phase of this system through the launch of "Digital Identity", which seeks to standardize the process of electronic authentication and signature at the state level for the public and private sectors to enable future life experiences (provided by smart cities) for UAE residents and visitors, and promote happiness and human well-being by employing state-of-the-art technology to deliver comprehensive and sustainable services."

The launch of the first phase of the initiative is the culmination of coordination and cooperation between relevant government entities at the local and federal levels, and the embodiment of their understanding of their strategic role in promoting the economy, facilitating and attracting investments and establishing businesses to enhance their engagement and emphasize the importance of government integration to implement the national agenda. The next phase will see the on-boarding of the remaining local entities overseeing the licensing of activities in the rest of the emirates that have shown unparalleled cooperation in implementing all requirements of the initiative and catering to the necessary technical and logistical requirements.