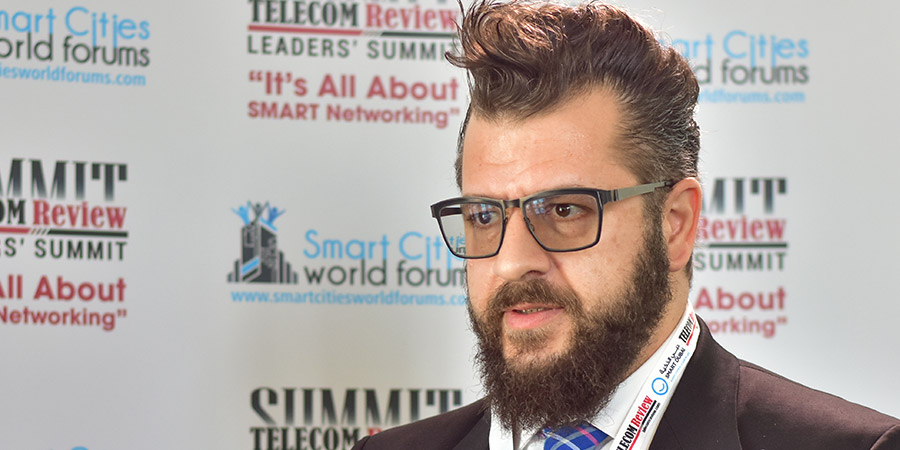 The cybersecurity community should focus more on crypto-economics, said a blockchain expert speaking to Telecom Review at the Telecom Review Leaders' Summit 2017 in Dubai. Toufi Saliba, CEO of PrivacyShell Corp. and Chair of the ACM Practitioners Board Conference Committee, said crypto-economics and how it can be brought into the cybersecurity space is not something that's taken into consideration as much as it should be.

A blockchain is defined as a continuously growing list of digital records, called blocks, which are linked and secured using cryptography. By design, blockchains are inherently resistant to modification of the data, thus the technology is being adopted by governments around the world, including the Dubai Government, which recently launched the Dubai Blockchain Strategy.

"This is my first time in Dubai and coming to this Summit is quite overwhelming," Toufi told Telecom Review. "It's filled up with a lot of folk who are very influential in the industry. This is quite fascinating because you do need people to collaborate from different areas of the world – if we don't transport people to come and collaborate together, then people cannot be as effective as they could be. I'm quite humbled and honored to be a part of this event."

Toufi is the CEO of PrivacyShell Corporation, the creator of Toda Protocol, the most scalable crypto-blockchain attaining 3 million+ secure transactions per second. PrivacyShell builds crypto-blockchain startups, while privacy and security are built by design. The company follows a systematic approach starting with a product, to a dedicated team and revenue to then have a company.

"I co-authored the Toda Protocol which we're bringing into a lot of startups as well," Toufi added. "It's an efficient blockchain protocol. I do those two things in parallel, and at the same time I co-chair the ACM (Association for Computing Machinery) with 100,000 members." The organization runs workshops in 25 cities, with a yearly global summit in San Francisco.

TodaCorp is the company behind the Toda Protocol. The most secure, efficient and scalable value exchange protocol, capable of processing over 3 million transactions per second and powering over 8 billion devices globally. TodaCorp is geared to license technology that can be used to "bank the unbanked" globally and specifically in the emerging market.

In July, TodaCorp and Algorand announced that they would enter into a joint venture known as Toda-Algorand Corp. to deliver a decentralized transaction platform combining the ledgerless ease and scalability of cash payment systems with a flexible ledger-based technology. The ground-breaking platform will also enhance and incorporate the features of existing financial payment systems.

"We have built and now licensing a technology framework and platform for everyone who sees value in decentralized governance and distributed computing to have their own public blockchain" said Toufi. "This blockchain architecture is unstoppable. It will enable every connected device to participate in powering decentralized global finance and many other industries to follow."

"I spoke recently at the Cybersecurity Summit in Beijing and I know for a fact that many of the cybersecurity experts are not taking it into consideration, because the technology wasn't innovated in the cybersecurity space, but more in the blockchain space," Toufi said. "Blockchain is partially cybersecurity, partially AI [artificial intelligence], and partially finance and economics."

Toufi added, "As this is evolving in the blockchain, I've noticed that it can bring in a lot of innovation for cybersecurity. For example, in spamming, if you were to send an email that was going to cost you one cent, you would still send that email because it's only one cent. But spammers sending one million emails per second would cost them $10,000. It's not going to be feasible for the spammer to spend that much money per second, and that's an example of crypto-economics."

In a blog post in May this year, Toufi said the distributed and decentralized power of blockchain could enable the entire global economy to run simply on connected smartphones, without the cloud, servers, central entity, or government.

His second panel at the Summit focused on artificial intelligence as "the new frontier". Toufi spoke about how decentralized governance can be applied to anything that is autonomous artificial intelligence, such as autonomous vehicles, and so on. "With that, I think we need to apply a lot of security and I'm hoping that the decentralized governance that is part of the security needs to be taken more seriously," he said.

Dubai aims to be the first blockchain powered government in the world, by which the Dubai Blockchain strategy, launched by Smart Dubai and the Dubai Future Foundation, will contribute to increased government efficiency by enabling a paperless digital layer for all city transactions.