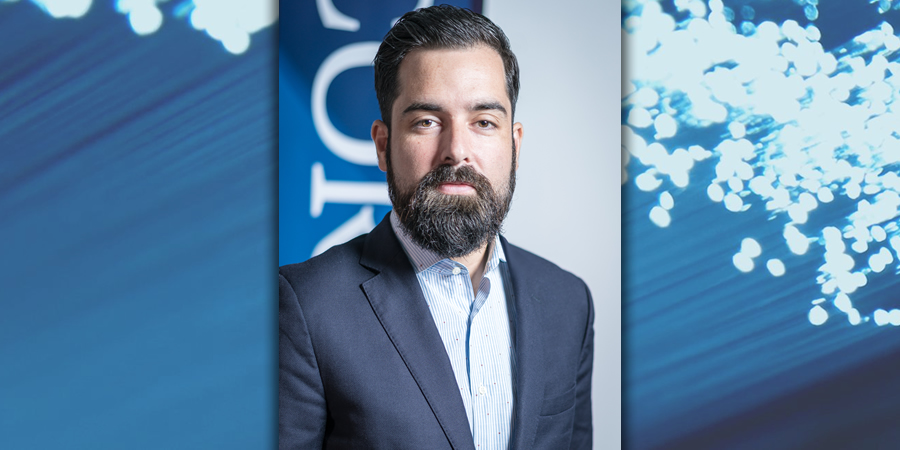 Colina has shown dynamic leadership and vision since assuming the role of Regional Sales Director for Corning Optical Communications in the Middle East, and has helped solidify its position as the No.1 supplier of FTTH products.

In a brilliant interview, Colina outlines what differentiates Corning from its competitors and how it aims to play a key role in helping Saudi Arabia achieve their national transformation objectives. In addition to this, he highlights how Corning will continue to invest in new technologies to create cutting-edge innovations designed to address specific telecommunications network challenges.

The FTTH Council is a body that has been established to ultimately improve the adoption of fiber across all the various different types of applications. I now get the opportunity in my role as President to really shape the vision of the FTTH Council MENA to foster that adoption into 5G, wireless applications and smart cities. The council’s mission over the next two years is not going away from FTTH, but essentially making sure that fiber is adopted as the preferred medium of choice in FTTH, 5G and smart cities in an effort to ensure that fiber really becomes the medium to deliver the bandwidth capacity that is required in the Middle East.

FTTH as a technology is well-established. For example, the UAE has the highest penetration of optical fiber in access networks globally. In addition to this, Saudi Arabia is also currently undergoing a vast amount of FTTH deployments too. So FTTH is already there, but we do also want to use the benefits of fiber being utilized across the different applications, as we believe that fiber is future proof and enables all the capacity and latency required for next-generation networks. If you look at the FTTH Councils globally, a lot of the sister councils have rebranded and unveiled a new strategic mission.

For example, the FTTH Council in the United States has been renamed as the Fiber Broadband Association. The FTTH Council in Africa is now called FTTX Africa. So it’s not just FTTH MENA, but in fact all sister councils under the Fiber Council Global Alliance are proactively trying to ensure that fiber gets adopted not only for FTTH, but across all the Fiber to the X type of applications.

The growth of FTTH coverage has rocketed in the GCC region over the last number of years, particularly in Saudi Arabia and the UAE. What role is Corning playing in terms of serving both the FTTH demand and the push from network operators to have higher data speeds?

The UAE is very, very advanced in terms of FTTH deployment. Saudi Arabia, obviously because of the dimension of the country doesn’t have the same level of concentration, but is embarking upon a lot of projects and has invested significantly in FTTH. The latest metric we have at the FTTH Council MENA indicates that 94.3% of the UAE has FTTH coverage. If you compare this to other countries, especially those countries that people view as the early adopters of FTTH like South Korea and Japan then the penetration rates are even more impressive. South Korea has 90% and Japan has 81%, so the UAE is really driving FTTH adoption globally.

Corning has been a key player on both rollouts as the leading supplier of FTTH products. One of the important things that we’re expressing to our customers in the region is that Corning has over 45 million homes passed with FTTH technology globally. So we’re very, very proud of those numbers. In addition to this, we do help operators, not only to cope with existing demand, but also to be ready for future demands of fiber.

Overall, 5G has become a bit of a catalyst to make sure you have the FTTH infrastructure ready, because it will be needed for the deployment of 5G networks.

Corning has announced that it will invest $10bn in growth opportunities in an effort to solidify its position as the market leader globally. How much of that investment will be spent in the Middle East?

The announcement by Corning regarding its investment in growth opportunities was part of a Strategy and Capital Allocation Framework it unveiled in 2015. Under this framework, Corning is investing $10bn in growth opportunities across its various businesses – including optical communications. The investments include a combination of research and development, capital spending, and strategic acquisitions. We don’t really break down the investment per region.

We’ve already discussed the transition between FTTH and 5G during the course of this interview. However, what impact do you think the commercialization of 5G is going to have on the entire ICT ecosystem?

A lot of the ongoing debate about 5G is related to standardization. We need to realize that the standard for 5G has not been fully finalized - and there are still a number of discussions ongoing about 5G. However, I think one really healthy debate the ICT sector is having is in relation to the underlying technologies of what 5G is really going to look like at the end. My personal opinion is that it’s going to be something that doesn’t happen from one day to the next. 4G was an evolution of 3G, but it took some time. There was a lot of hype and people thought that all operators were going to move to 4G, but you still see some operators upgrading their 3G networks to provide 4G services.

The latency requirements and the capacity requirements for 5G are not going to happen overnight, it’s going to take time. Operators such as Etisalat and STC have announced that they’ve conducted 5G trials. They’re doing these 5G trials at the backhaul macro cell level, but there are still no mobile devices actually available to utilize the benefits of 5G.

We’re still at the early stages of 5G, but if there is a region globally where 5G will be adopted first, and by adoption, I mean driven deeper and deeper into the networks and closer and closer to the end users, then I think the Middle East will certainly be one of the first regions. The density Dubai and Abu Dhabi have is very, very high in terms of population per square kilometer or mile, not many cities in Europe have that density. So to get 5G services and KPIs in terms of capacity and latency to the end users, the 5G antennas will have to be very close to the end-user, which basically means fiber will have to go deeper. So that type of environment is right here in the Middle East, and that’s why I think the Middle East will be one of the first regions globally where 5G will be adopted first.

Corning is a global leader and market incumbent in terms of its fiber production and has phenomenal manufacturing and engineering capabilities. In your expert opinion, what is it that differentiates Corning from its competitors?

One of the key things that we’re most proud of and it’s something I mentioned earlier is the fact we’ve been producing low-loss optical fiber since the 1970s. In addition to this, we have 1 billion kilometers of optical fiber sold, which pretty much represents around a third of all the optical fiber globally.

However, if I had to pick one aspect which I believe fundamentally differentiates us from our competitors, then it would be the fact we’re the only true end-to-end supplier of integrated optical solutions. If you look at the fact that Corning is a manufacturer of optical fiber, we have the know how around optical fiber and we know how to cable that optical fiber. I think there are a lot of important processes within building that solution that Corning has a lot of knowledge in and that is one of the things that really, really differentiates us from our rivals.

Can you tell us about some of the exciting new projects Corning will be undertaking in 2019?

The whole region is undergoing a lot of investment in optical fiber infrastructure. The Saudi government has announced its national transformation plan entitled Saudi Vision 2030 and their ambitious aspirations for Saudi Arabia are a fantastic catalyst for innovation. Corning aims to play a key role in helping Saudi Arabia build its infrastructure to achieve their transformational goals.

In the UAE, next year’s EXPO 2020 has attracted significant investments in terms of creating new infrastructure, so there’s a lot of exciting opportunities in the region. In North Africa, we’re seeing huge investment taking place in an effort to get the infrastructure ready for the next evolution of optical networks. So our aim over the next twelve months is to ensure we provide our technology to all our customers in the region and we will also work with our customers closely to provide them with assistance in making the transition from their current optical network to a future proof 5G network.

Can you outline to us what your primary roles and responsibilities are as Regional Director of Corning Optical Communications Middle East?

I’ve been in the region since 2015. I was lucky enough to get the opportunity to come here when Corning asked me would I relocate to Dubai from Berlin. I really enjoy working in the Middle East, and I really want to make sure that we’re working together with our customers in giving everyone access to the latest state-of-the-art technology that Corning is currently innovating.

So my objective is really getting the team ready to start sharing with the customers all the advantages that Corning has when we provide end-to-end integrated optical solutions. I think there is a lot of value in that for end-users - and we want to make sure that we’re out there with the customers to ensure that their rollouts are successful and that they’ll able to get the fiber into the ground as much as they want and as soon as they can.